Year 5 thoroughly enjoyed their trip to the New Wolsey Theatre to see a rock and rock panto of Goldilocks and the Three Bears.

The children represented Chase Lane is a manner in which all adults were proud of and they all got involved with any singing, dancing or clapping along to the show.

Mr Sanders received special treatment from the pantomime dame and was the star of the show; he was lucky enough to get two kisses from the dame and all of the children found it very entertaining.

Throughout this term, the children in Year 5 have really embraced our Topic of learning about the human effect on our planet. They have shown great passion and consideration for all areas we have covered.

We were lucky enough to have a donation of bee-friendly flowers from The Essex Wildlife Trust so we could revive our flowerbed once more! It’s safe to say the children had an amazing time de-weeding, prepping and planting new flowers for our Year 5 bee garden. We are ‘buzzing’ to see them grow!

As part of our topic 'What are we doing to our planet?', Year 5 visited the Wrabness Nature Reserve to look at what the Essex Wildlife Trust have put in place to help the wildlife and so see how it has helped. It was great to observe how humans actions have made a positive impact to the wildlife and environment in our local area!

The children behaved incredibly well and were so excited to catch a range of bugs and beetles, create some shelters in the woods and interact with nature first-hand.

For or Against Renewable Energy?

Our new topic of ‘what are we doing to our planet?’ has kicked off with a lot of discussion and passion from the children. They have loved learning about the human impact on the planet and how best to protect it. They learnt about the pros and cons of renewable energy and had a friendly debate in small groups.

Year 5 had a fantastic time at Layer Marney Tower where they learnt all about how The Vikings once lived and how their invasions of England influenced our lives today. The children learnt how to weave, do archery, build model long boats and even were lucky enough to hold some Viking battle armour and weapons!

The children were all impeccably behaved and even the rainy weather didn't dampen anyone's spirits.

For our nonsense poetry unit, we have been learning The Jabberwocky. This poem has a lot of portmanteau words in it (words that blend the sounds together and combine the meaning of them to make a new word).

Take a look at the poem below to see if you can read it and also look at the photos of our drama work surrounding the poem – we all had great fun doing it!

“Beware the Jabberwock, my son!

The jaws that bite, the claws that catch!

Beware the Jubjub bird, and shun

He took his vorpal sword in hand;

So rested he by the Tumtum tree

And stood awhile in thought.

And, as in uffish thought he stood,

The Jabberwock, with eyes of flame,

Came whiffling through the tulgey wood,

And burbled as it came!

He left it dead, and with its head

He went galumphing back.

“And hast thou slain the Jabberwock?

Come to my arms, my beamish boy!

He chortled in his joy.

We learnt how to use the green screen app on the iPads to create our very own wildlife documentary called ‘Life.’

We hope you enjoy watching them! 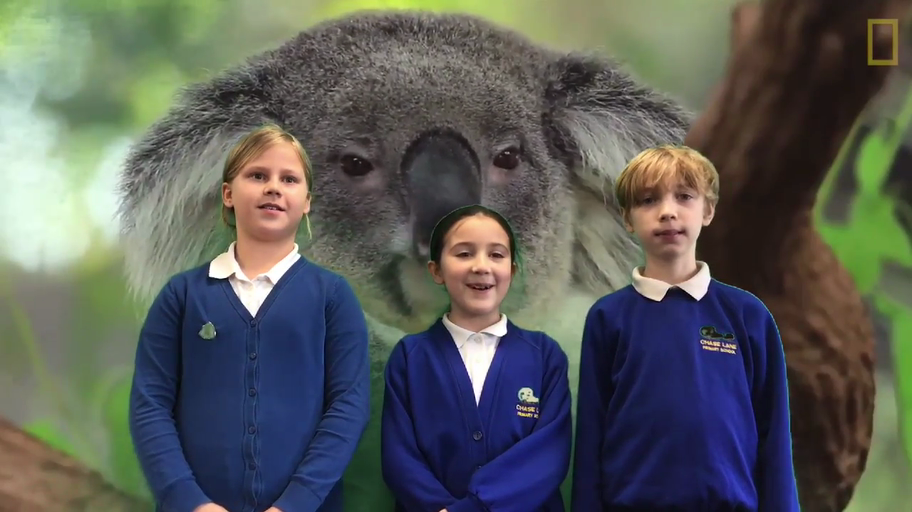 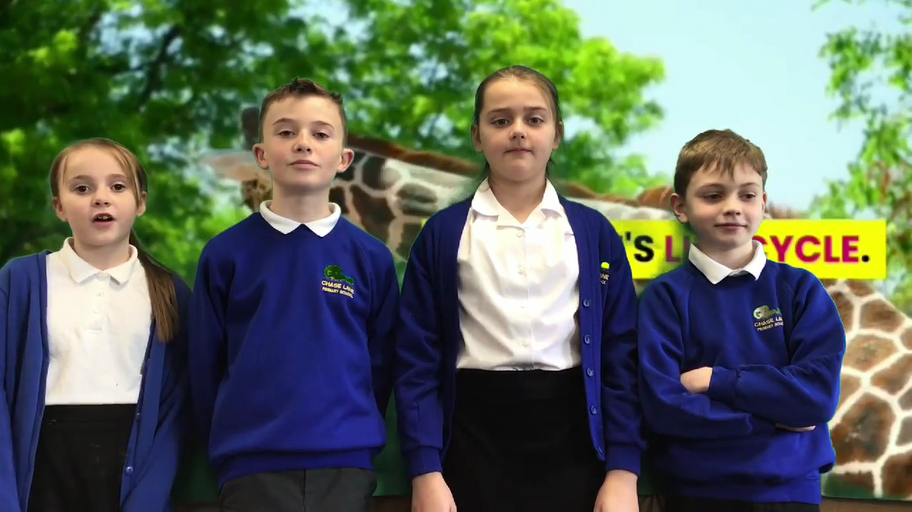 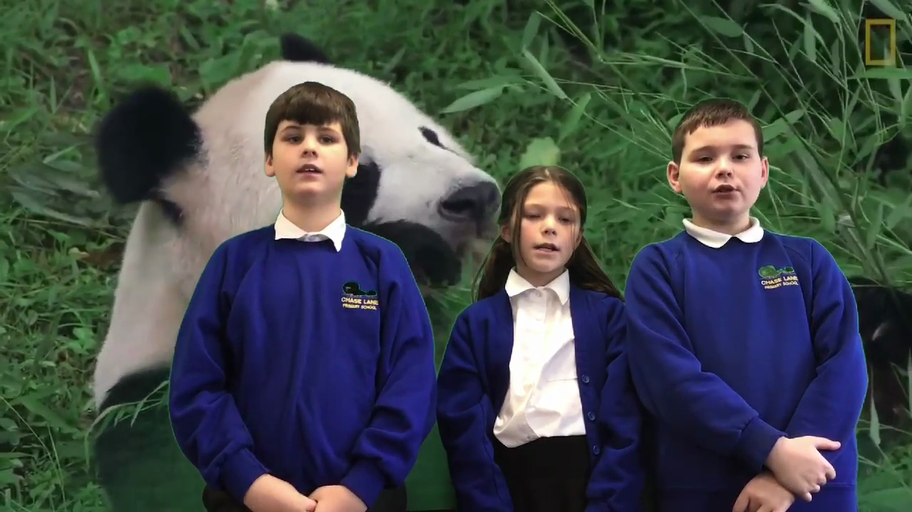 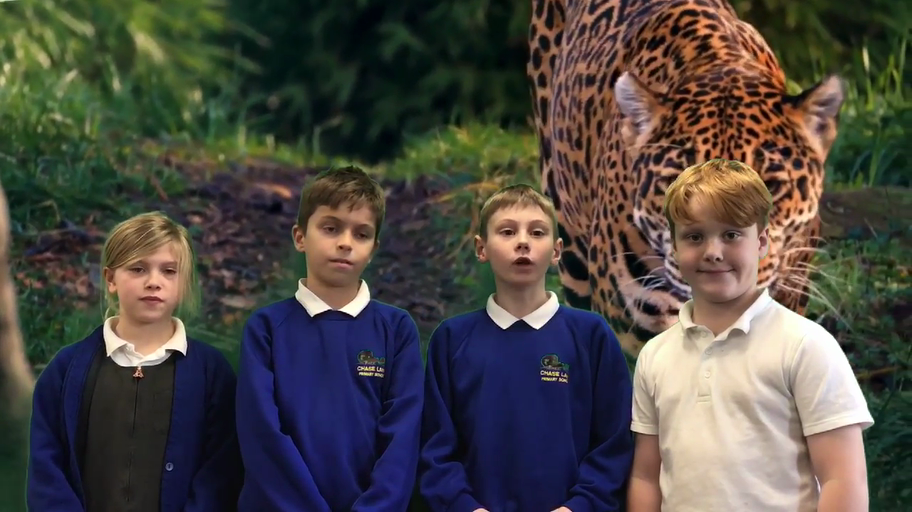 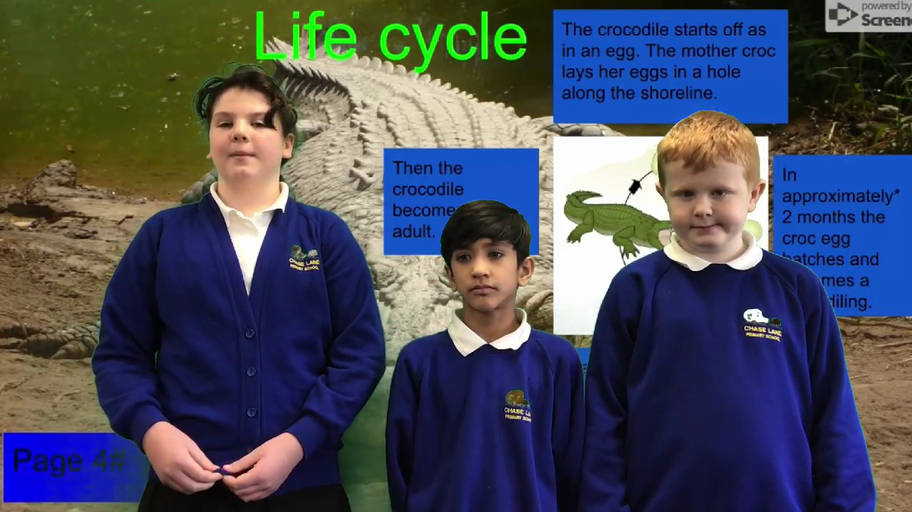 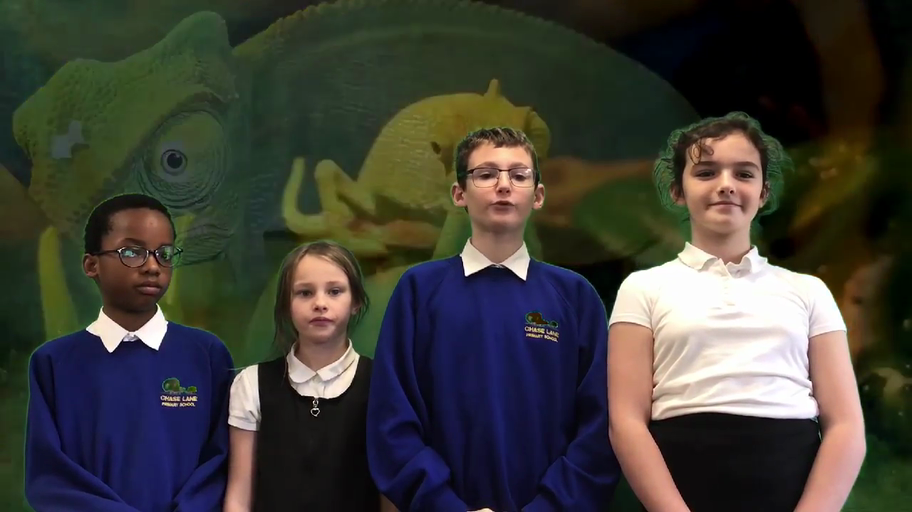 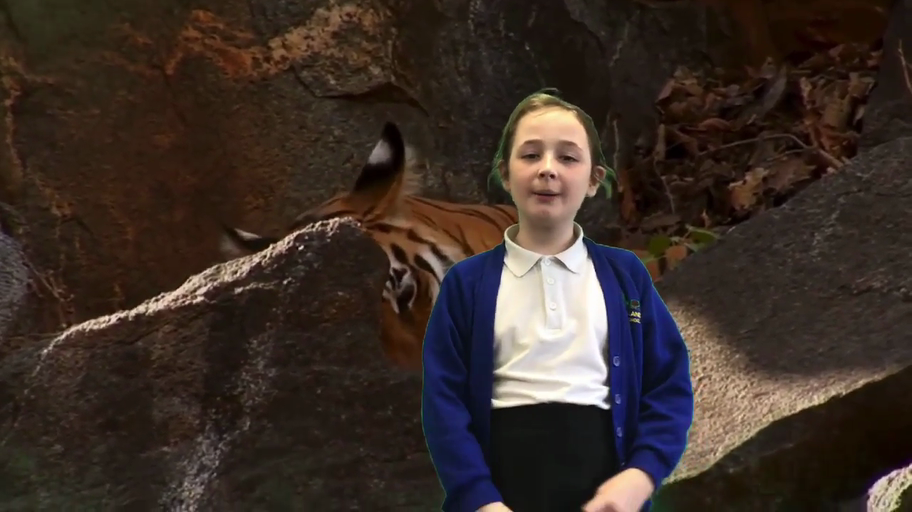 We then used mono-printing as a way of portraying different stages to the ancient Egyptian afterlife. Check out our photos of our work!

In Topic, we looked at some ancient Egyptian artefacts. We asked lots of interesting questions about these objects and made sure we investigated the answers!

We studied the following artefacts:
Tutankhamun’s Death Mask, a sarcophagus, a scarab beetle, a piece of Egyptian clothing, the Sphinx, some papyrus paper and Egyptian wall paintings.

For our ‘Wow Starter’ coming back after half-term in Topic, we learnt all about canopic jars and how the ancient Egyptians used them. When they died, they believed that preserving and mummifying their loved ones would help them pass over to the afterlife safely. The ancient Egyptians used to remove the liver, lungs, intestines and stomach of the dead and they were washed, dried and wrapped in cloth which allowed them to be placed into the canopic jars in one piece.

We had to use many skills when making our Egyptian Canopic Jars. We had to use crosshatching on the clay to make sure individual parts attached properly. We had to sculpt the clay, using water to help blend and smooth. We used a water and clay mixture which is called slip. Our canopic jars were then placed in a kiln. After our clay had been in the kiln, we glazed our jars in various colours: grape, red, blue and yellow.

For this lesson, we were able to discuss and act out the movement of the Earth, and other planets whilst orbiting the Sun. The Sun is at the centre of our solar system and we learnt the order of the planets and how they move in the solar system. 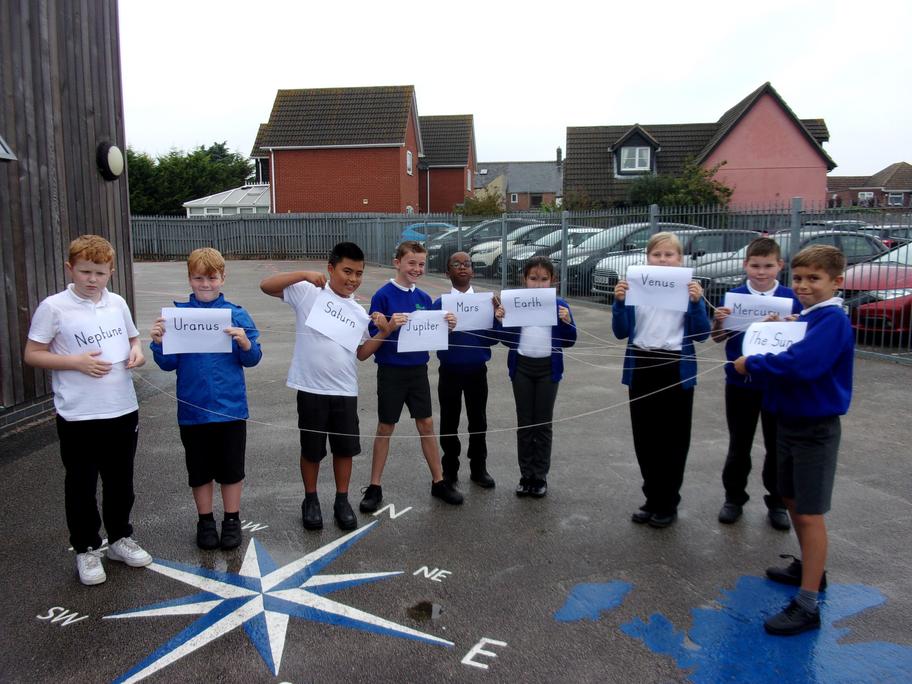 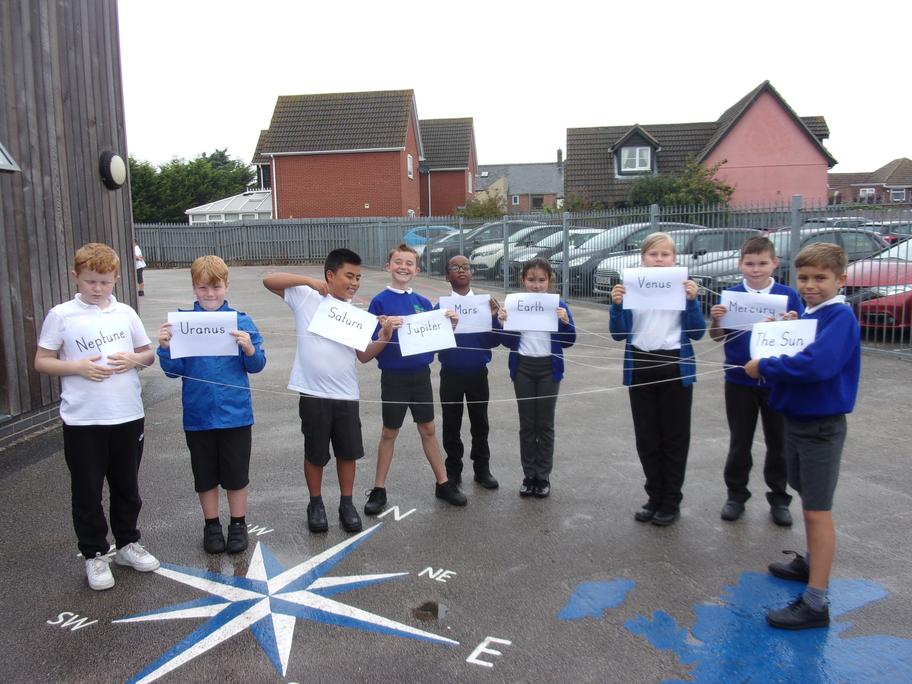 The Myth of Osirus and Isis

In Literacy, we have been learning about myth stories. The myth we have been learning about is about two brothers; one who is made pharaoh and one who was extremely jealous and decides to kill his brother! To really immerse ourselves in our new text, we did a conscious alley from the point of view from of a few characters. We then did a short burst of writing from the point of view of one of the brothers.

The Journey to the Afterlife

In Literacy, we have been learning about explanation texts. We have read an explanation text called ‘The Journey to the Afterlife’ which explains what the ancient Egyptians believed they needed to do for their loved ones once they died so that they can reach the afterlife safely. We split up into groups and we created a freeze frame for each paragraph of the text to help us understand the process they went through.

In RE this term, we have been focused on Jesus the Healer. We have learnt about all of the stories from The Bible that explained what happened when Jesus healed his followers. From these stories, we learnt that sometimes Jesus directly heals them (by touching them) and other times he indirectly heals them. We have had many opportunities of drama during this unit so here are some photos!

Jigsaw – Being Me in My World

For this lesson, we worked in our table teams and we chose an item from a bag without looking. In the bag, there was a selection of random items, such as, spoon, pebble, coins, frisbee, bell, egg timer and cups.

Our ‘mission’ was to make up a new game using the item we selected.

Some teams created rules for the game and it was clear how to win. Other games were a little confusing because the team did not come up with clear rules for the game. We thought about and discussed the following questions:

• Why do we need rules in society?

• How do rules keep us safe?

• What can we do if we think a rule is not fair?

• How can rules in a school help us to learn and grow?

We understand that rules, rights, and responsibilities are necessary for groups of people to live harmoniously together and achieve their goals.