As part of our topic 'What are we doing to our planet?', Year 5 visited the Wrabness Nature Reserve to look at what the Essex Wildlife Trust have put in place to help the wildlife and so see how it has helped. It was great to observe how humans actions have made a positive impact to the wildlife and environment in our local area!

The children behaved incredibly well and were so excited to catch a range of bugs and beetles, create some shelters in the woods and interact with nature first-hand.

Year 5 had a fantastic time at Layer Marney Tower where they learnt all about how the Vikings once lived and how their invasions of England influenced our lives today. The children learnt how to weave, do archery, build model long boats and were even lucky enough to hold some Viking battle armour and weapons! 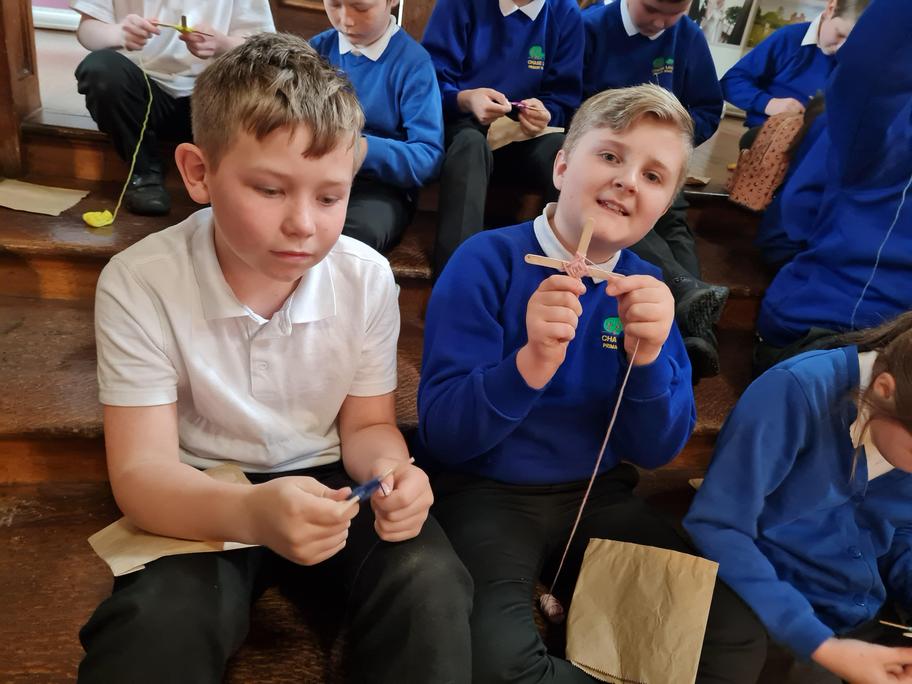 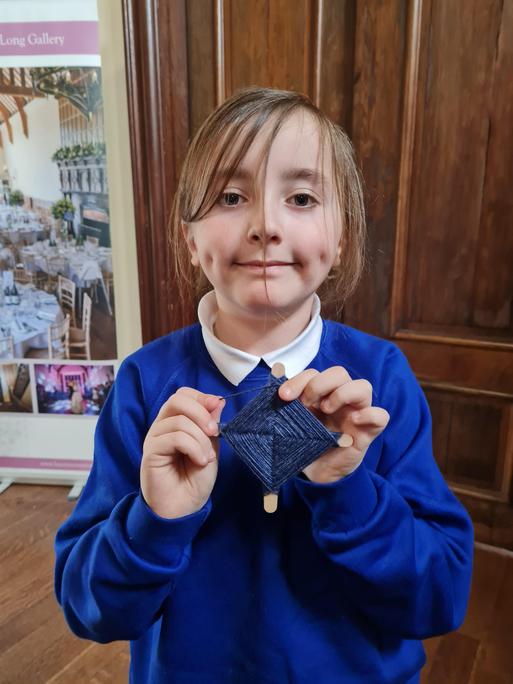 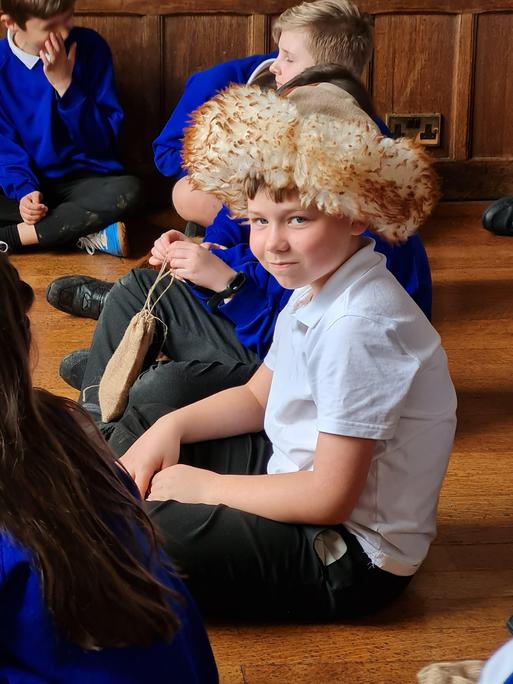 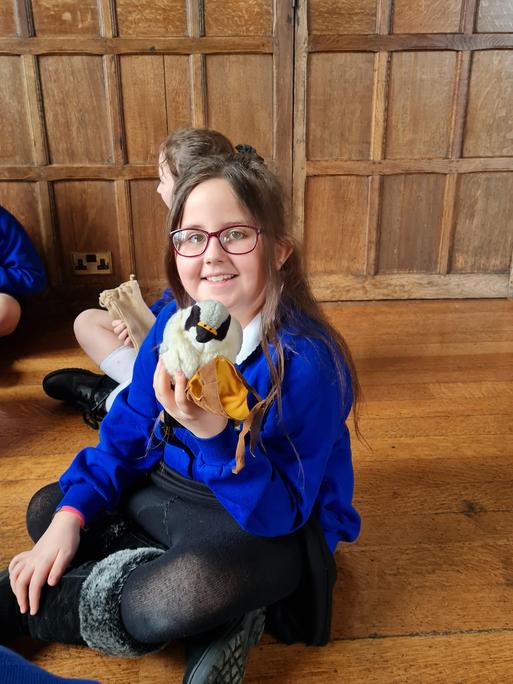 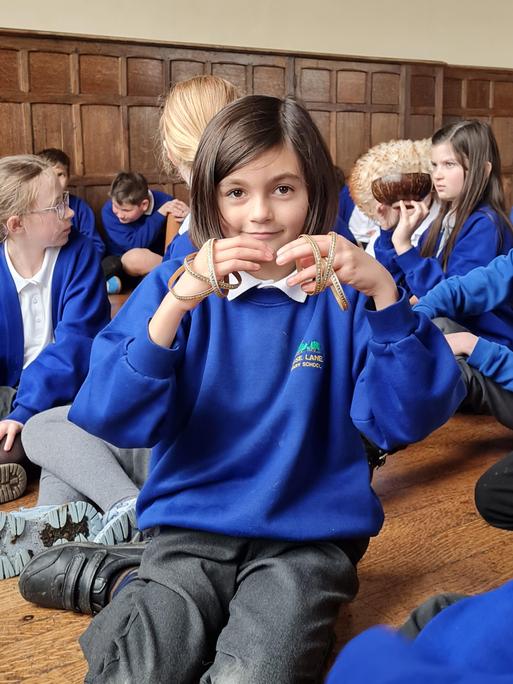 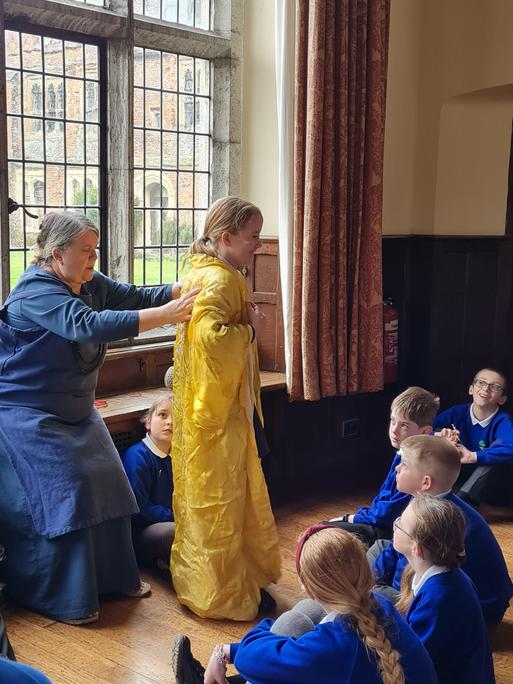 This year, Year 5 were lucky enough to help out with the construction of lanterns for the Illuminate Festival. The children showed great enthusiasm, team-work and creativity. They represented the school in a fantastic manner and were so engaged and well-behaved the entire time! 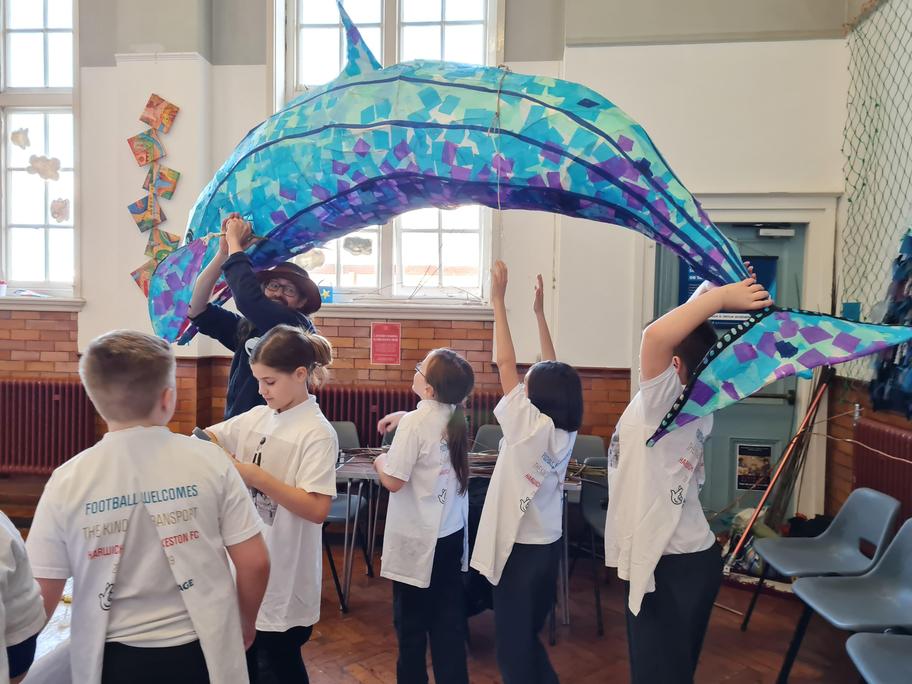 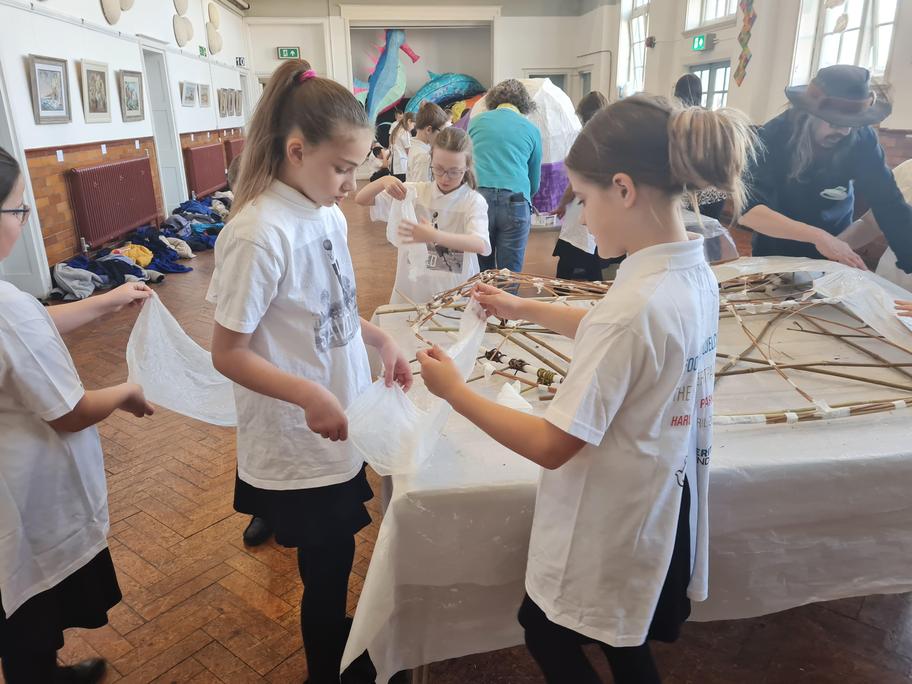 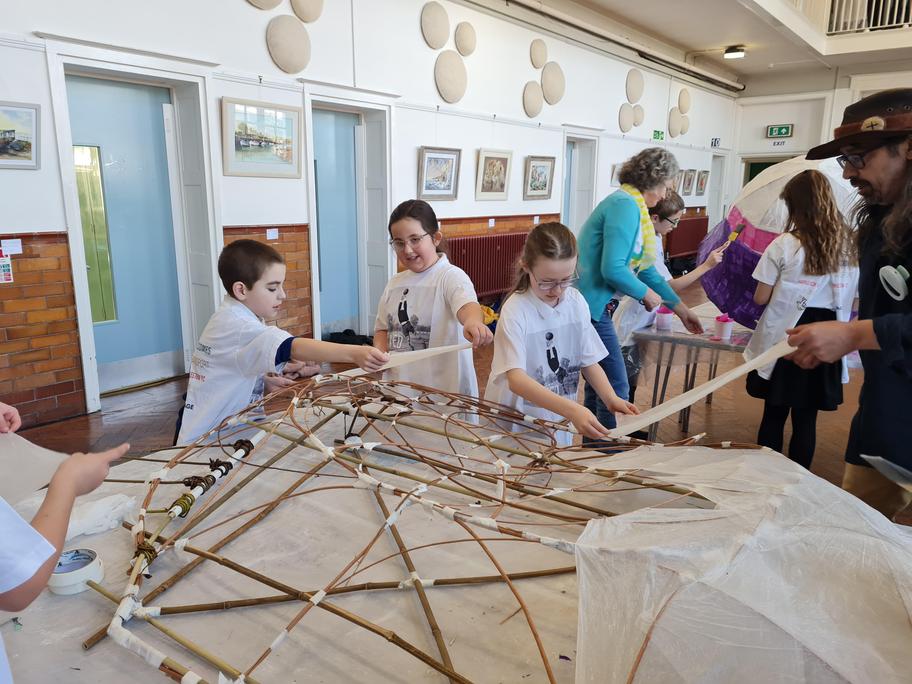 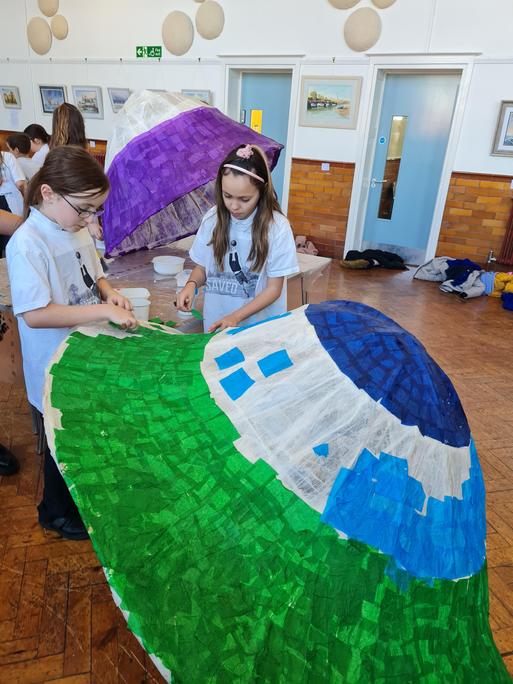 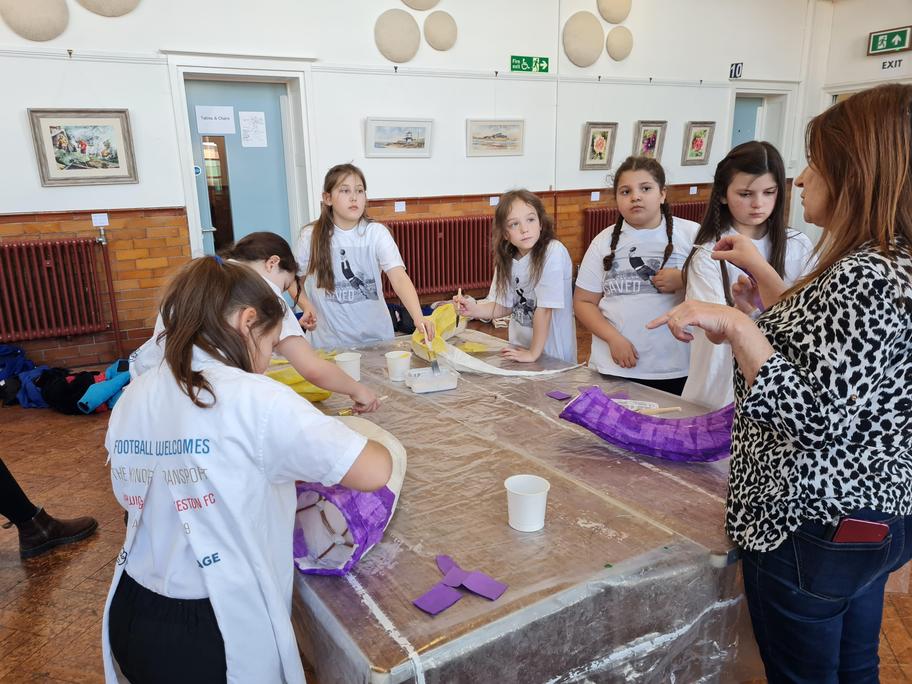 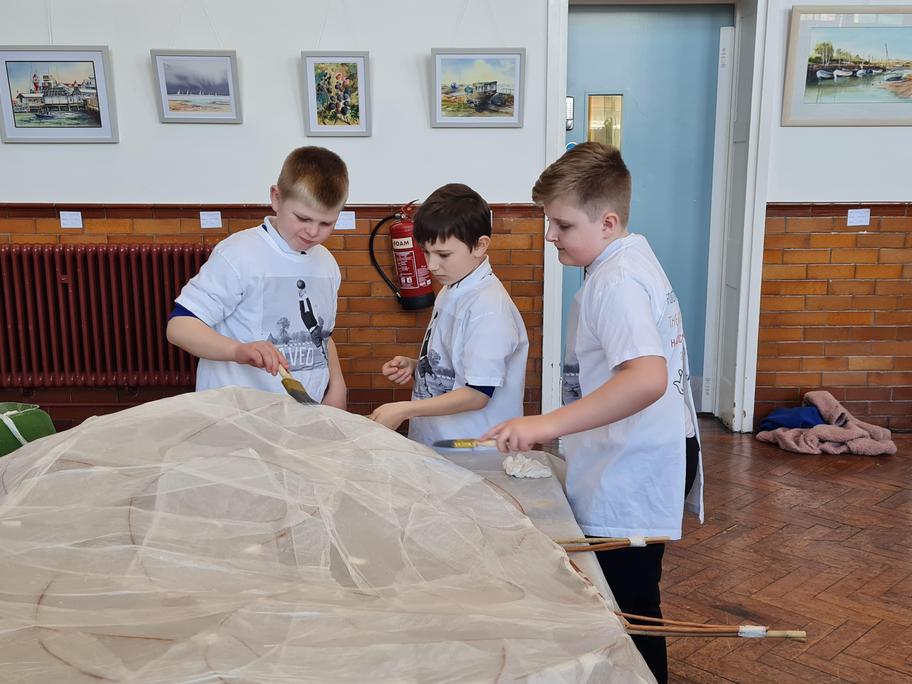 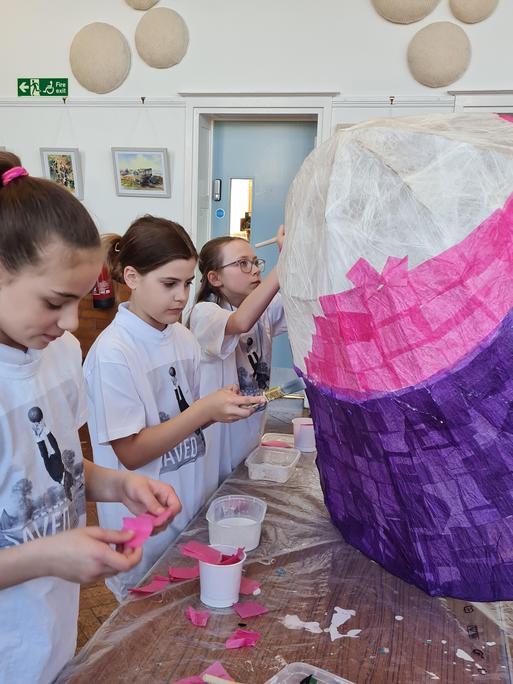 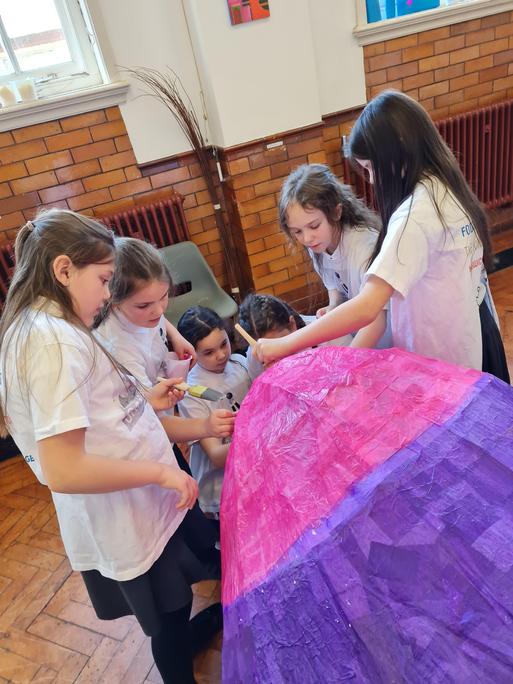 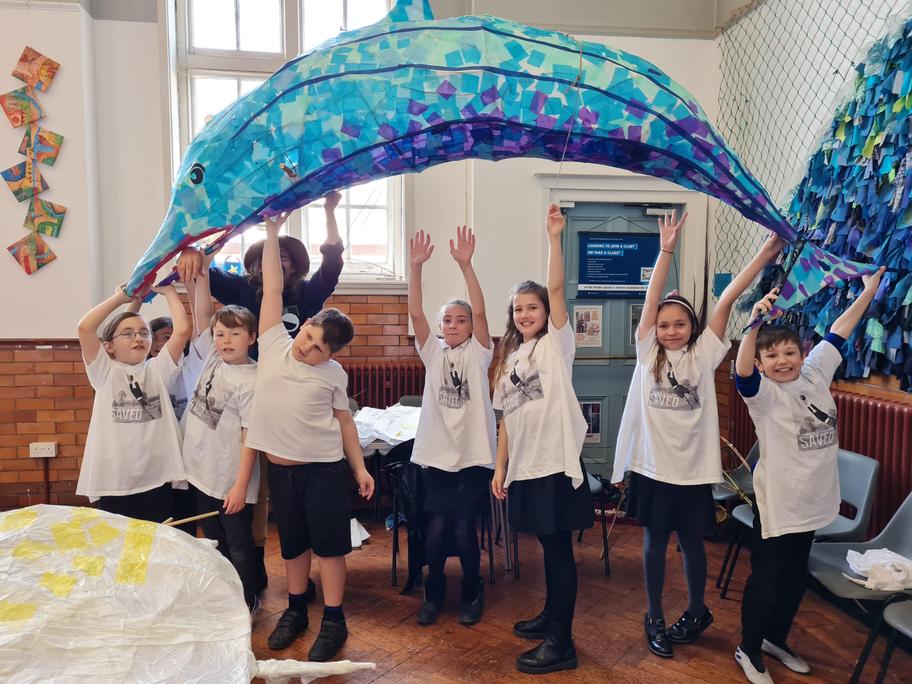 For our nonsense poetry unit, we have been learning The Jabberwocky. This poem has a lot of portmanteau words in it (words that blend the sounds together and combine the meaning of them to make a new word).

Take a look at the poem below to see if you can read it and also look at the photos of our drama work surrounding the poem – we all had great fun doing it!

“Beware the Jabberwock, my son!

The jaws that bite, the claws that catch!

Beware the Jubjub bird, and shun

He took his vorpal sword in hand;

So rested he by the Tumtum tree

And stood awhile in thought.

And, as in uffish thought he stood,

The Jabberwock, with eyes of flame,

Came whiffling through the tulgey wood,

And burbled as it came!

He left it dead, and with its head

He went galumphing back.

“And hast thou slain the Jabberwock?

Come to my arms, my beamish boy!

He chortled in his joy. 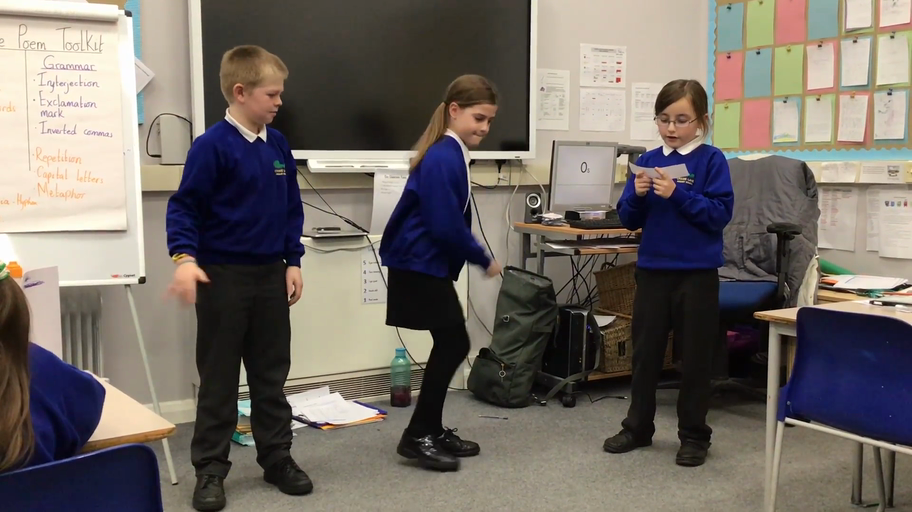 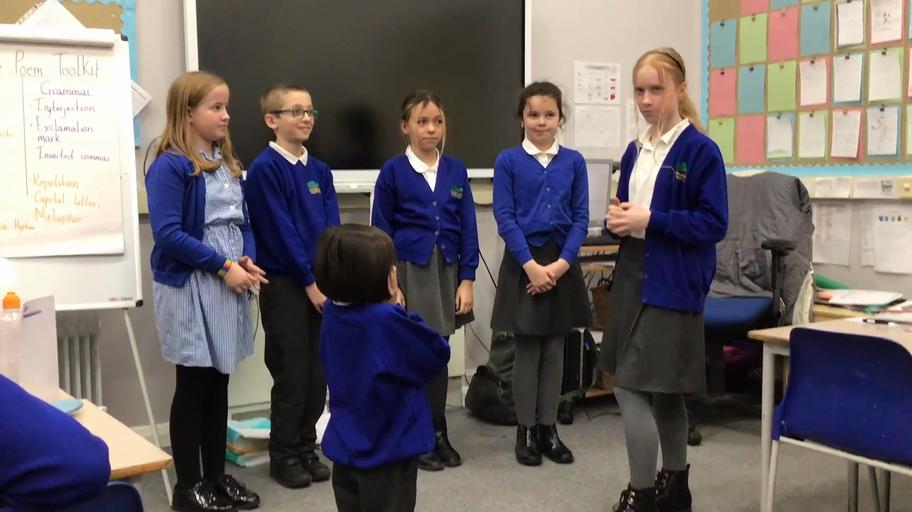 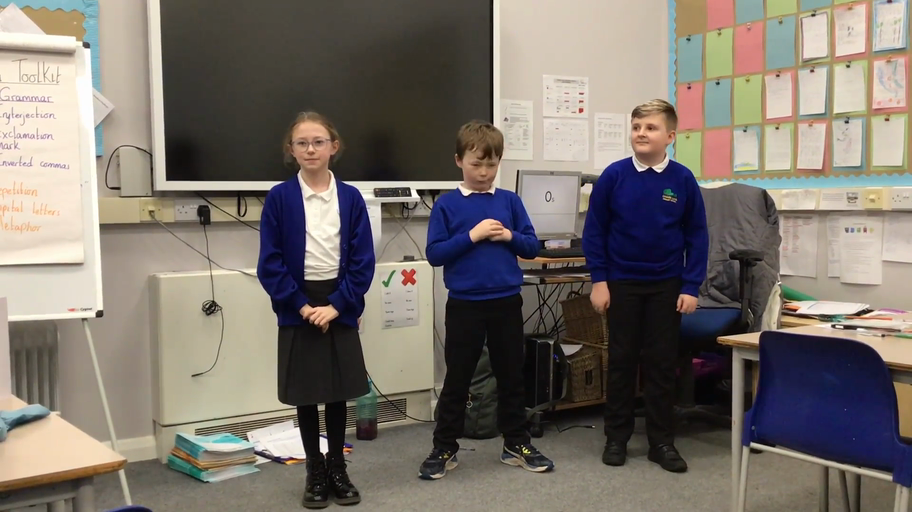 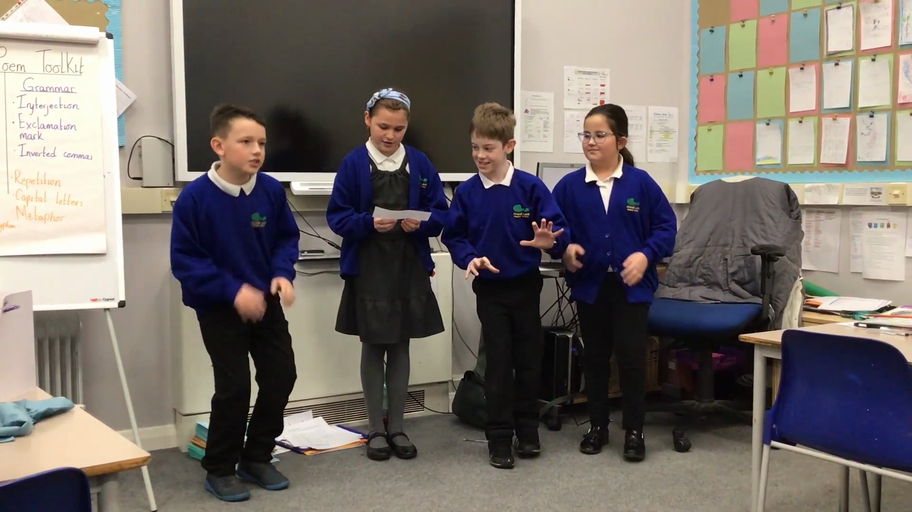 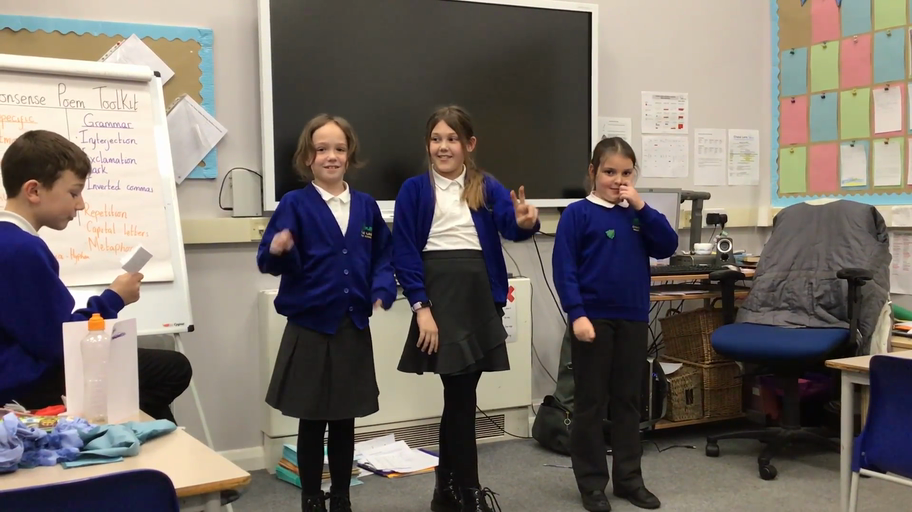 We learnt how to use the green screen app on the iPads to create our very own wildlife documentary called ‘Life.’

We hope you enjoy watching them! 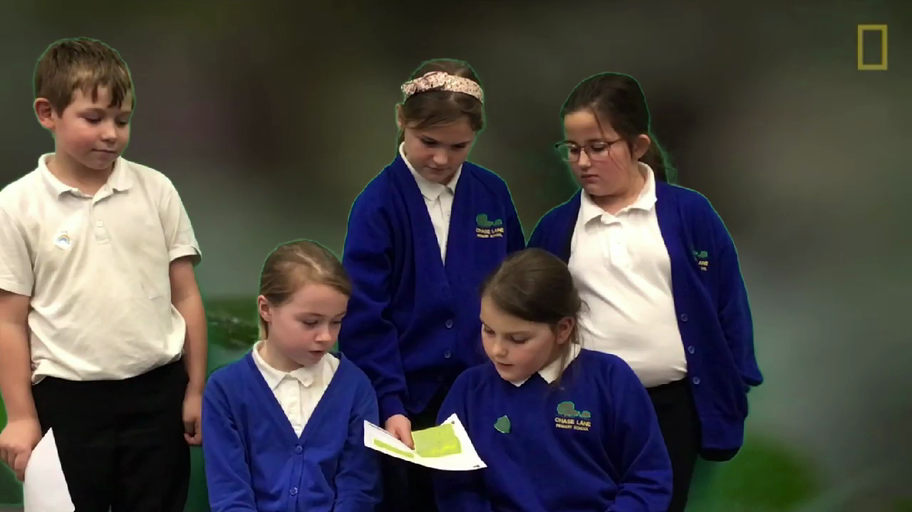 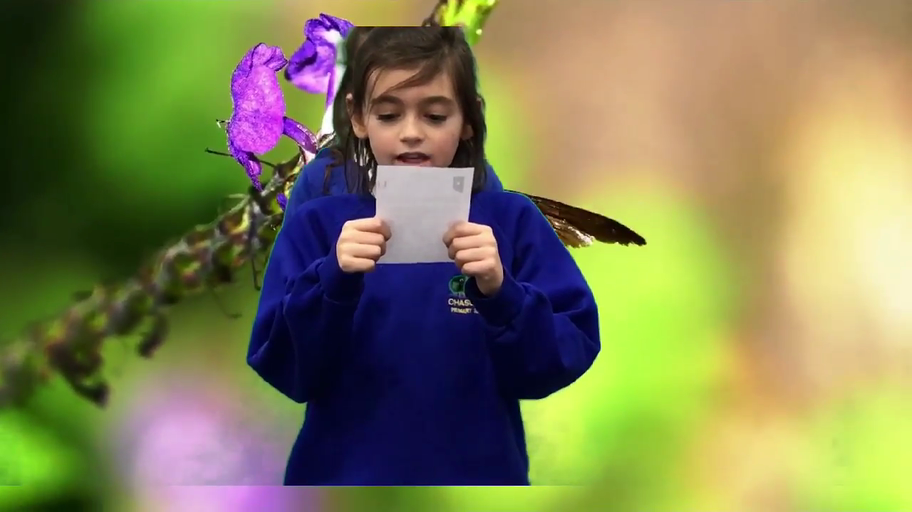 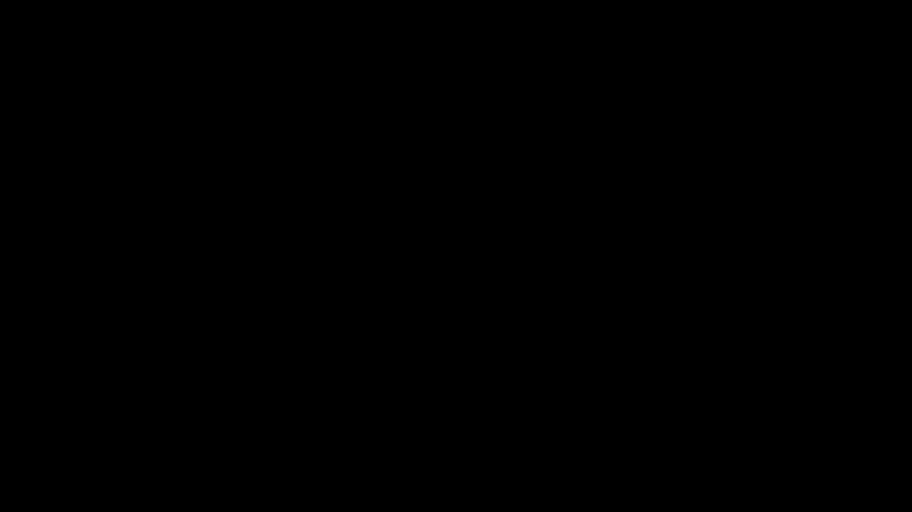 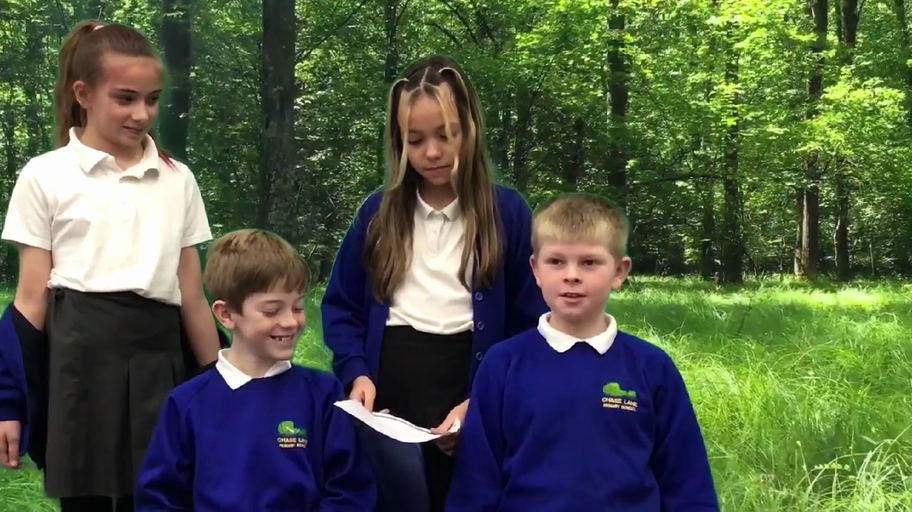 For our ‘Wow Starter’ coming back after half-term in Topic, we learnt all about canopic jars and how the ancient Egyptians used them. When they died, they believed that preserving and mummifying their loved ones would help them pass over to the afterlife safely. The ancient Egyptians used to remove the liver, lungs, intestines and stomach of the dead and they were washed, dried and wrapped in cloth which allowed them to be placed into the canopic jars in one piece.

We had to use many skills when making our Egyptian Canopic Jars. We had to use crosshatching on the clay to make sure individual parts attached properly. We had to sculpt the clay, using water to help blend and smooth. We used a water and clay mixture which is called slip. Our canopic jars were then placed in a kiln. After our clay had been in the kiln, we glazed our jars in various colours: grape, red, blue and yellow.

We then used mono-printing as a way of portraying different stages to the ancient Egyptian afterlife. Check out our photos of our work!

For this lesson, we were able to discuss and act out the movement of the Earth, and other planets whilst orbiting the Sun. The Sun is at the centre of our solar system and we learnt the order of the planets and how they move in the solar system.

In RE this term we have been learning about healing and miracles. As part of our lesson today, we focused on the miracle of the healing woman. First, we discussed the importance of music within religions and discussed some examples of when music is used within religion.  In order to help us to remember and explain the key points of the miracle of the bleeding woman, we had to create our own song. Our song had to be to tune of ‘Twinkle Twinkle Little Star’ or ‘Frère Jacques’. We worked as a group to think of our lyrics, rehearsed and then preformed to the class.

The Myth of Osirus and Isis

In Literacy, we have been learning about myth stories. The myth we have been learning about is about two brothers; one who is made pharaoh and one who was extremely jealous and decides to kill his brother! To really immerse ourselves in our new text, we did a conscious alley from the point of view from of a few characters. We then did a short burst of writing from the point of view of one of the brothers.

In Literacy, we have been learning about explanation texts. We have read an explanation text called ‘The Journey to the Afterlife’ which explains what the ancient Egyptians believed they needed to do for their loved ones once they died so that they can reach the afterlife safely. We split up into groups and we created a freeze frame for each paragraph of the text to help us understand the process they went through.

PSHE - Being Me in My World

For this lesson, the children had to work as a team to create the tallest tower made out of paper and sellotape only.

The first time round, there were no rules given; every child just had to get stuck in to help.

The second time round, the children were given clear job roles which were a material manager, designer, timekeeper and task manager. It was important that the children stuck to their roles and worked as a team.

Some teams worked extremely well and this was clear based on their communication and teamwork. After the activity, children had to write down six rules that they thought were important to be successful with this activity.